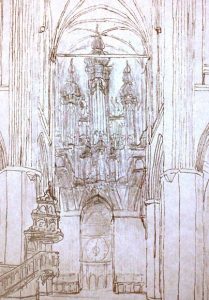 1606 Destruction of an organ above the shoemaker chapel (today the chapel of the Mann family) by fire, caused by organ renovation works. Nothing more is known about the instrument and its exact position, and if it was the instrument mentioned in 1452.

From 1590 to 1593, Heinrich Glowatz builds a large organ (3 manuals, 52/54 stops) at the western end of the nave. Slightly differing descriptions are known from 1619, 1645 and approx. 1680. At the latter date, the organ was already modified. A synoptic specification is found below.

This instrument was taken down in 1765 by Paul Schmidt to make space for his new organ. The Oberwerk windchest was recycled by Schmidt as a pedal windchest in the organ built by him at that time for the village church of Neuenkirchen, not far from Rostock. It is still in use there.

The image (click to enlarge) is a visualisation based on details mentioned in bills of painters and organ builders, and on comparison with other organs from that time in the same region. The imeage depicts a situation between 1723 (completion of the pulpit’s hood) and 1749 (removal of the large clock beneath the organ to replace it by the duke’s loft).

Specification of the Glowatz organ: