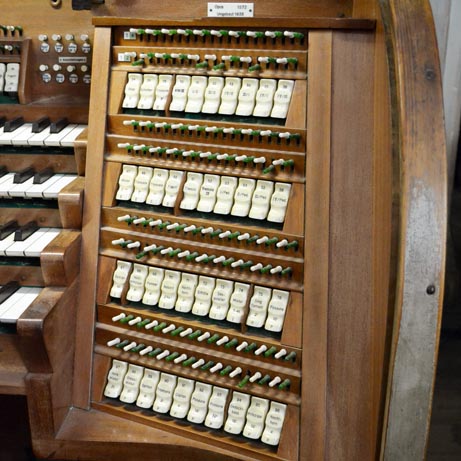 In 1937, it was considerd to “refill” the devastated instrument (read more>) at least to its former size. This seemed to be possible now as Germany recovered from the depression time of the 20ies and organ building, as everything else in the “Reich”, became part of the “Bewegung” (the Nazi movement). Since 1935, the use of several raw materials was restricted due to their meaning for military purposes. Thus, the rebuild was done in a hasty manner using all of the extant material und adding new pipework mostly made of zinc. The action was changed to electric, integrating the slider windchests of 1793 (using the technology of English cathedral organs) and the cone windchests of 1907.

Artistic director of the project was Prof. Fritz Heitmann (Organist of Berlin Cathedral and demanded organ advisor and teacher), the rebuild was done by Wilhelm Sauer Orgelbau (Inhaber Dr. Oscar Walcker), Frankfurt/Oder. It was one of Germany’s leading firms, but the limitations named above led to an instrument of just mediocre quality.

After the war, there was one major repair in 1983, carried out by VEB Sauer-Orgelbau, where some damaged wooden ranks and the free reeds were replaced.

The instrument’s stoplist/specification after the renovation of 1938/1983 and the origins of the components are found in this PDF document (with some German terms):

On this page, you find a table view of the specification:

The terms “Hauptwerk, Schwellwerk, Positiv, Oberwerk, Kronwerk” can’t be found on the console. They follow practical conclusions and a local tradition.