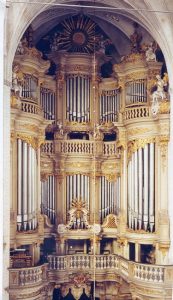 Soon after the first indications of major faults of the Schmidt organ became obvious, organ builder Julius Ernst Marx of Berlin was called to rebuild or replace the existing organ. Work commenced in 1789 and was completed in 1793.

The written sources occasionally talk about a new build, but on the other hand, repairs of components are mentioned. Also at other locations, Marx appeared to be a less serious business-man (e. g. in Stralsund). It may be concluded that  extant material of the Schmidt organ has been retainend much more than stated officially.

From the Marx organ, today the windchests of Great Pedal, old Small Pedal, and Manuals II, III and I (except Kronwerk chest) are preserved, as well as the pedal reed stops Posaune 32′ and Posaune 16′. More pipework by Marx may exist but could not be surely assigned yet.