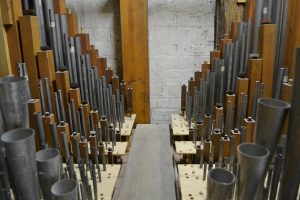 After approx. 40 years the wind supply was modified. Works have been carried out between 1836 and 1842 bei organ builder Heinrich Rasche (Rostock, later Doberan). This was unsuccesful, and organ builder Friedrich Wilhelm Winzer from Wismar completed the job in 1842 and 1852. (Among his apprentices there was August Neuburger, who left inscriptions within the instrument. Neuburger was taught by Friedrich Friese of Schwerin and became in 1848 a succesful workshop leader at the atelier of Aristide Cavaillé-Coll in Paris). First alterations to the specification are carried out.

1879 and 1885, Stralsund organ builder Friedrich Daniel Albert Mehmel works at the organ. His contributions seem to be mostly barker machines for the action.

From 1886 to 1911, organ builder Carl Börger of Rostock-Gehlsdorf was working on the organ. In 1905 he installed new reservoirs and the first electric blower (Pollrich of Leipzig). He lowered the pitch one semitone to modern standard pitch. In 1907 he added a swell division with 16 stops and 4 new pedal stops. For that he made use of pneumatic cone-chests.

When in 1917 warfare authorities called for all facade pipes to be delivered for the ammunition industry (“tin donation”), not only the facade pipes but more 3.200 pipes of 42 stops have been delivered. 18 wooden stops have become unusable, so that only 23 stops remained playable.

The fact that “modern” stops have been retained stresses the idea, that there was a vision of creating a new, high-romantic instrument after the end of war, making use of some retained material. Two firms tendered for such a job in 1919. A contract was signed with Koulen organ builders of Augsburg, even a first rate was paid.

In 1921, the Koulen firm disappeared within the economical crisis of those days. The Rostock torso from 1917 stayed unaltered. In 1928, mock-up facade pipes of painted wooden planks were installed.

Specifications of the Remains-Organ from 1917

It was recorded in 1934 – stops which are extant today are marked + , stops with indication W are made by Winzer: