In our last post we talked about hand-painted donation appelas from now and then (around 1980). The 80’s have been a hard time in the German Democratic Republic. Organ repairs could hardly be afforded. The Rostock organ has been revised 1983 and 1986, but there still where demands. KMD Joachim Vetter, organist of those years, ran a concert series with own and guest performances, but playing this organ was no joy for him. Too many tonal and technical issues have been unresolved.

Some images shall illustrate this era. We start with an “operating manual” for visiting organists, reading:

Only 1 stop is much to weak at those loud noises from outside. In general, much coupling should be applied.

The weak sound of the organ is indirectly named by mentioning the influence of noises from outside. At inauguration 1938, there was no major road and no traffic around the church. But in the 80’s, there was not only the traffic, but there were always pending repairs of broken windows, which made it even easier for noise to penetrate the church. Playing mostly with coupled manuals is still the common practice at this instrument. 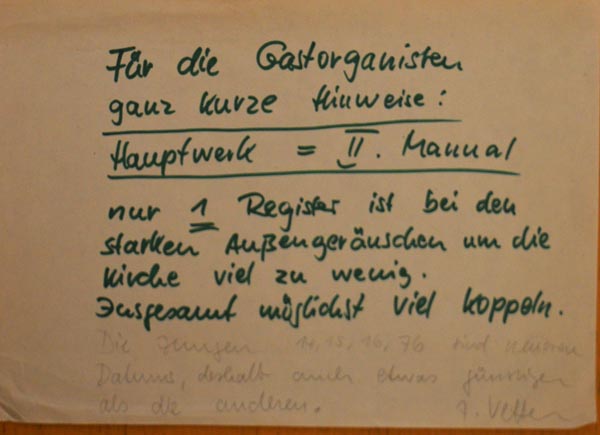 The next illustration is the broken connection between resonator and block of  a pipe of Sordun 8′ (Sauer 1938) in the pedal division. This is occasionally caused by visitors or even maintenance staff, bending the resonators incidentally. At his spot the pipe has to be soldered again.

In the GDR, it was not only hard to get materials, it was hard to get organ builders resp. working capacities, too. So, a less professional solution was found. It was a sort of mastic (like used to glue window screens into the frame), which obviously failed and hence was added by some all-purpose adhesive.

At another pipe, the black traces indicate that the pipe was soldered with an open flame, which is also not the organ builder’s way. But that’s how it was done under those circumstances…