On 24 March 2022, the extended advisory board met for the second time. It was a hybrid meeting with live and ZOOM participants. 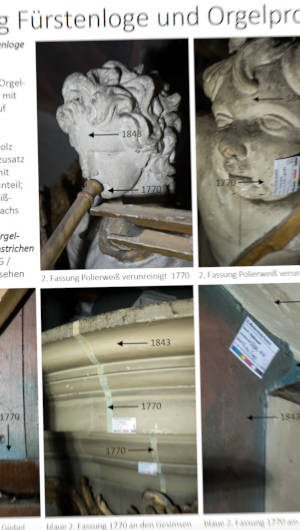 Bastian Hacker, expert for restoration of surfaces, reported his findings during his research on the organ facade, the organ loft and the duke’s loft. Information on the present state of the material was given and suggestions for restorations were made.

A major problem is the contamination with several toxic substances which were part of two campaigns against woodworms (1938, 1983). Those substances can never be removed completely. A process of partial removal preserving the original material  was discussed.

Organ and lofts will retain their colour scheme from around 1841, but it will carefully be cleaned. Damaged woodwork will be repaired, the guilding refresehd, where necessary, and some broken glass panels repaired. An original carpet of the duke’s loft will receive further investigation.

The second topic of the meeting was the presentation of a scheme for a redesign of St. Mary’s organ. It was prepared by the group of organ advisors and organists within the board.
Behind the baroque facade, an instrument built after classical principles shall be created, being of high quality and a reduced size compared to the existing organ. Additional controls for contemporary organ music shall be included, preferably achieved merely bay mechanical than by electronic means.
A choir organ /chancel organ shall be provided, too. This instrument shall be able to serve independently from the main organ, but will also be a corresponding part of it. Its position is not yet decided, as is the tonal scheme. The latter shall be conceived within the next months.
Organ builders should receive quite much freedom in deciding which materials (ranks of pipework) should be kept within the coming instrument. On the other hand, integration of extant pipework shall be set as one of the targets with the option to discard materials when accurately motivated.
When the scheme is roughly  determined, a small number of capable organ builders shall be invited to discuss it and to make further developments. Then the presumable cost of the project can be named, funding (hopefully) made possible and a final decision made.