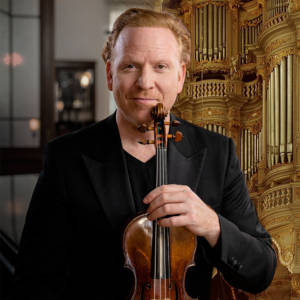 Daniel Hope is an internationally celebrated Violinist and a well-known presenter. Supporting charity events and social or cultural projects is  part of his work.  Together with pianist Jacques Ammon, his long-term concert partner, they gave a charity concert for the restoration of the organ of St. Mary’s Church of Rostock, performed in the Nikolai Church.

In the first section of the programme, Christian Packmohr (trumpet player of the North German Philharmonic Orchestra) and Karl-Bernhardin Kropf (Organist of St. Mary’s) were heard.

In her welcoming words, the minister of St. Mary’s, Elisabeth Lange, dealt with the question if raising funds for a pipe organ is appropriate under the times of war. She mentioned the fact, that the concert place is a church widely destroyed during WW II, and the site of the organ is a church wich luckily survived. So, war and its terror were present, and Lange pointed out, that even hunger, the hunger for culture, is deeply felt at the (supposed) end of the pandemic. In the background of the church, stacks and boxes of material for ukrainian refugees already arrived in Rostock and for the camps near the Polish border were visible.

Former German president Joachim Gauck, as the patron of this concert, made a passionate appeal to support the organ project and confirmed the worth of arts and culture in dark times. Gauck led the Prayers for Peace at St. Mary’s during the peaceful revolution in the GDR in autumn 1989  and called it a very important time of his life.

Daniel Hope fascinated the audience with a wide range of musical styles and introducing words for every work he played, adding that he feels very happy to perform for a larger audience again.

Due to the circumstances, no more funds were collected for the organ this evening, but a retiring collect for the Ukraine help gained 2,500 EUR donated by the audience of approx. 300.  Joachim Gauck announced to double this sum.

In favour of the organ, an amount something less than 10,000 Euro was gained – precise figures will be given later.

The Society of the Friends of Church Music within the Lutheran City Parish of Rostock wants to express cordial thanks to the artists and former president Gauck!